Introducing our beloved sisterwife Melinda, writer of this blog entry and creator of the world’s loveliest desserts. We love it when she comes home to surround us with her love and sweetness.

i am a winter girl.  everyone who knows me well knows that i’d rather live in january than june, and i’d rather wear sweaters than sundresses.  but summer has a few perks, reasons to keep me on the rotating… and chief among these is stone fruit.  the smell of the season is wrapped in the fuzzy fur of peaches, the baby’s cheeks of apricots, the silky, sexy skin of plums.  have you ever poached a peach, to remove its skin?  it comes off in a slippery, sensual sheath… leaving behind a glowing orb of sweetness, the colour of a july sunset late – nearly bedtime.  [stone fruit are one of the worst fruits for pesticides.  if you’re unconvinced about the ickiness of conventional growing practices, try poaching an inorganic peach.  the chemical-smelling scum that rises to the top of the water will have you running for the nearest farmers market in search of sanctuary.]

anyway, this weekend was a quintessential assortment of summer days; lovely enough to mollify me with regards to the heat (yes, i think 75 degrees is ‘hot’).  on friday i spent the night with a friend who was housesitting inland, and i spent the morning perched in trees (first plum, then apricot) tossing fruit into my bag below.  ‘i should stop,’ i thought, when i had about ten pounds, but then i stood back and looked at the trees and you could barely tell that they’d been harvested.  so i went in for another ten.  the drive home was heavenly; my car blissfully redolent of sunshine and sugar.

said the woodpile to my chest, ‘at least one of us is well-stacked.’ saturday my parents and i put in the better part of the coming winter’s firewood – massive rounds of old growth fir that we loaded into, and then out of, the back of the truck.  our arms and backs and knees ached, and from finger to bicep we were covered in pitch that smelled like christmas.  when my father swung the maul over his head and brought it down on the largest rounds, my face was splattered – kissed – with fir water; not sticky yet as sap, but fresh and cool and delicately sweet.  seeing the pile that will warm you over the months to come is something to relish.  with that wood my mother will bake bread, i will mull cider, my rabbit will sleep under the stove, and our home will be warm and welcoming.  and in the broader spectrum of Eat Mendocino, our fuel source for food and warmth will be local, and its harvesting made us stronger in body and spirit both.

sunday was jam day – one of the best days of the year, ‘christmas of summertime.’  the 14 pounds of plums were ceremoniously cooked down with the last meyer lemons of the season, and safely canned into their mason jars, away from prying tongues.  if there is anything more delicious than plum jam, i haven’t yet met it.  as it is, we put by enough that all through the gray of winter we’ll have the tang and joy of summer for our hearth-baked bread.  i would like to name a daughter ‘plum,’ but erika says she’ll end up a stripper.  but then, look at me!

and that brings us to today.  a bus ride brought me to sarah’s door, and when gowan appeared in the afternoon she came bearing treasure:  a box of peaches that practically glowed with internal light, like souls all lined up in a row.  showing up at sarah or gowan’s is always a treat because i’m inevitably treated to a feast of epic proportions, created from colours and flavours no grocery store’s produce aisle can compile.  i rarely have anything to contribute to the meal beyond a dirty joke, since they move with the practiced dance of those who are intimately familiar with their ingredients and their purpose, but tonight i volunteered to take on dessert, since the SECOND thing people who know me well know is that i love to make dessert.  like, LOVE it.  i usually like to make it more than i like to eat it.  which is weird, i know… but in my family food is a source and sign of love, so cooking for someone is akin to making them an edible valentine.

sarah’s kitchen does not readily accept more than one cook, so i was tasked with making dessert that could be assembled while dinner (stuffed squash, purple potatoes, greek corn salad, mixed green salad…) cooked.

my grandmother had a magnet on her fridge that said ‘i love cooking with wine.  sometimes i even put it in the food.’  truer words were never written.  so it was with great fanfare that i opened a bottle of goldeneye’s jaw-dropping pinot gris, and divided it amongst the people and the pot.  i set that to simmer, reducing it until it was the colour of my favourite dark pink lipstick, and its flavours of berry and citrus had been concentrated.  at the last moment i stirred in a little honey, and then i turned to the cheese.

to some lovely Pennyroyal Farms chevre i added the zest of a meyer, as well as a squeeze of its juice, plus some honey and the chopped blossoms of some of the elegant french lavender that mendocino is so full of right now.

then came the peaches.  i heated a lovely large pat of local butter in cast iron, and when it was bubbly i put in four peach halves, cut sides down (leave the skin on or they’ll not be nearly as pretty in the end).  i fried these until the butter had browned  and the peaches were a lovely caramelized pale brown on the bottom.  i covered a serving bowl with sliced strawberries; little jewels that were almost sinfully crimson.  the peach halves rested on this bed of red, and into their pit holes (there has GOT to be a prettier word for that…) i scooped lovely little pillows of cheese.  the whole thing was bathed in the wine reduction, and garnished with lavender sprigs.  i would have liked some mint in with the berries, but the last of it had gone into the (amazingly delicious) greek salad, which was an excellent excuse. 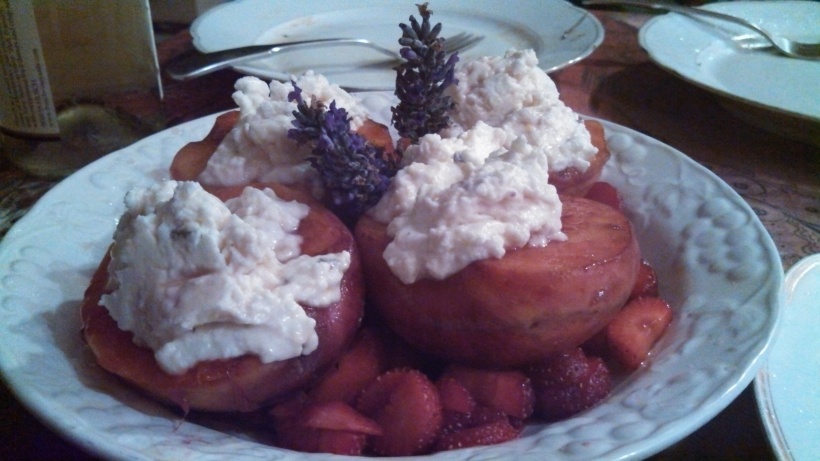 anyway, the room was filled with mildly inappropriate moans of love as we licked our plates and wondered whether we could lick our own thighs when we dribbled nectar onto our jeans (we can’t.  oh well.).  and i am content to let summer swallow me, so long as it includes stone fruit, pink wine, and good friends.

if you’d like to recreate this magical concoction, here are some approximations:

fry 2 peaches (4 halves) in 3 tablespoons unsalted butter in cast iron, until the butter and peaches have both browned.

simmer 1.5 cups rosé until it’s reduced by half (at least.  more[which is really less] is better).  then add a spoonful of honey and stir to dissolve.

mix the zest of a meyer lemon and a generous squeeze of its juice into half a cup of soft cheese (chevre, ricotta, mascarpone…).  season with fresh chopped lavender and honey to taste.

and toast to the sun when you eat its glory. warning: you may find yourself inappropriately licking your plate. cheers!