Two days ago, Gowan stopped by my house to pick up my lemon tree to keep it safe from the winter frost. She mentioned that it was only a couple of weeks away from the New Year – a year of eating local. I said, “Oh, are you still doing that?” She replied, “I want to.”  In the midst of baking chocolate brownies, I said, almost automatically,

“Maybe I should do it with you.”

One day later, my head is exploding with how this experiment in eating locally could connect so many of the dots that we’ve been working on for a long time, and bring the conversation about local food in Mendocino County to the next level. By the time we speak that afternoon, I have brainstormed a full media plan and I am already starting to think about what I won’t be able to eat. We talk. We talk some more. She likes my ideas, I love hers. She’s a farmer and an artist and I am an idea mill, connector and media lover. This could be big. It will be big, based on the feat alone. Perhaps it could also be big for other people, and makes some big things happen here in Mendocino County. I’m in.

As soon as I get off the phone, I go for a walk and head directly to Frankie’s Ice Cream

for a scoop of Candy Cap Mushroom goodness.  Because now that it’s real, I will start doing all of the things that I won’t be able to do in less than two weeks (the mushrooms are local and so is the milk, and it’s made locally, but… it’s not 100% local). I take my ice cream and head toward the beach. Along the way, a homeless guy shouts from the bus stop, “Has anyone told you that you’re beautiful today?” Nope. “Well, you are.” I take this as a good sign. Compliments from strangers are always a good sign. It’s way too cold for ice cream and I can hardly taste it, but I am really happy. Walking along the headlands, with the winter waves crashing against the rocks I am feeling this great convergence.

Anything is possible here. I have always believed that. 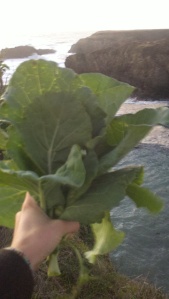 This project (yet to be named) would be living, vibrant proof of the abundance that exists in the world. I am liking what this will look like – how the days will be spent, the people that will be involved, and – yes – the food that will be eaten. As I head home, I pick some Portuguese kale that grows wild on the headlands – it’s time to start.

In some ways this will be life as usual, and it will also involve some major changes. This excites me, and I spread my arms out like wings, walking into the chill wind. Also, I’m not at all worried about the ice cream, we can make as much of that as we want.

One thought on “The Big Idea”