The second installment by sisterwife Elizabeth, pictured here with me at the Mendocino County Fair this weekend. Because sometimes we are not in the kitchen and also, you are never too old to get your face/body painted. 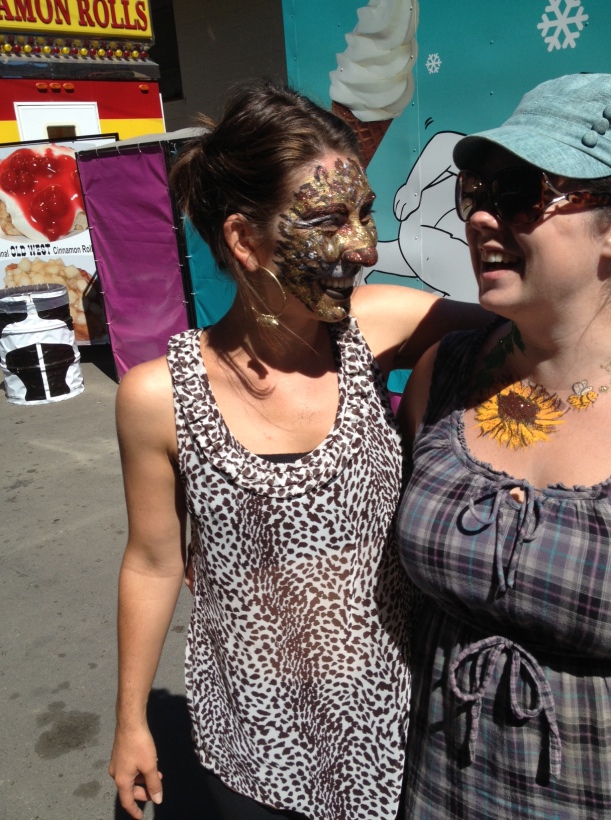 Preserving Food, Part II: Can It!

Canning is not as hard as people think it is. It can be time consuming depending on what you’re making, but it’s not a difficult process. I didn’t even start canning by myself until this year, but I already feel like a natural.

Last time, I wrote about making pickles. To make those pickles shelf-stable, follow these simple directions. (Not short, but simple.) Note that some foods are not safe to process in a water bath and need to be done in a pressure canner to be shelf-stable. Always check a recipe (or three) to find out if what you want to make is appropriate for the water bath method. 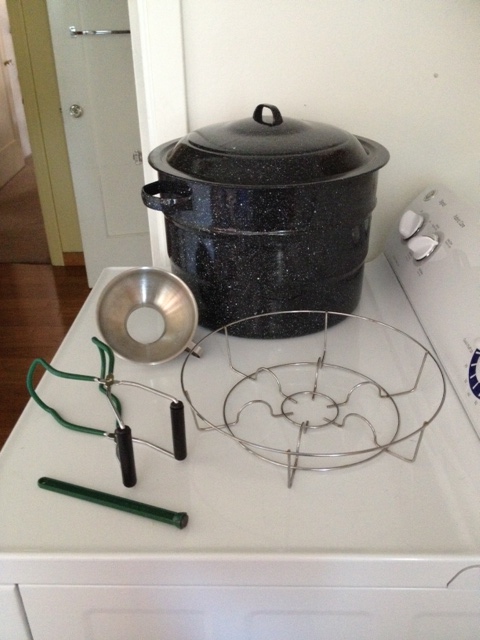 Here’s how you do it. This applies to everything, not just pickles.

1)     Prepare a water bath. Take your biggest pot and fill it so that the jars will be covered by at least 1 inch of water. Put the canning rack in the bottom, cover, and bring to a boil.

2)     Put all your lids (not the rings) in a small saucepan with some water, and turn it to low heat. This loosens the rubber and helps form a better seal. These should sit in hot water for at least 10 minutes, but keep an eye on them – you don’t want them to boil.

3)     While the water is heating up, prepare the pickles. Note that many recipes instruct you to first boil the jars – you certainly can do this, but as long as the jars are clean it’s not necessary since they’ll be boiled (and therefore sterilized) momentarily. (There is some wisdom to the idea that hot jars are less likely to crack/explode in a boiling water bath, but often by the time I take my jars out of the hot water and fill them, they’re cold before I put them back in anyway.)

4)     Once the jars are filled with goods and you’ve added the brine (see Part I), use a chopstick to try to dislodge any air pockets. Add more brine if necessary.

5)     Remove the lids from the saucepan (I have a little magnetic wand, but you can just drain them). VERY IMPORTANT: Before you put the lids on the jars, wipe the rims with a wet cloth. If there’s anything on the rim, it might prevent a seal. (Vinegar probably won’t mess it up, but sugar definitely will.)

6)     Place the lids on the just-wiped-clean rims, add the rings, and tighten until they’re on pretty well but not so tight that your grandma couldn’t get them off.

7)     Turn the heat on the water pot down so it stops boiling. This will help you not get burned.

8)     Using jar tongs, gently place the jars in the pot. It’s okay if the jars touch, but you don’t want them to be so crowded that they won’t be able to move a little under the boiling water. If you have more jars to can than room in the pot, just do a second round.

10)  Once the water is boiling, set the timer. Some recipes will tell you 10 minutes, some 15, some 20 – I usually do pickles for 15, but you can do a quick Google search for whatever vegetable you used to check the recommended time. (Fruit and bigger jars take longer.)

11)  When the time is up, remove the lid and turn off the heat. Leave the jars in there for 5-10 minutes (if you take them straight from boiling water to room temperature, the jars are more likely to break).

12)  Remove the jars using tongs. I always line them up on a towel on my counter. Wait for the delightful “ping!” noise that tells you a jar has sealed. (This sound never gets old.)

13)  A few hours later or the next day, press down on the tops of the jars. If they don’t bounce back, congratulations! You made shelf-stable food. Remove the rings and gently lift the jar off the counter a few inches by the edge of the lid just to make sure the seal is good. Store without the rings (so they don’t rust) in a cool, dark place. Conventional wisdom is that these are good for a year, but I’ve had 2-3 year old canned goods that were just fine. Always inspect newly opened jars with your eyes and nose when you open it. If it looks fine and smells fine, it’s fine. Do not open jars with bulging lids – this is a sign of botulism, which is very rare. This is a good resource for more on canning and food safety.

14)  If the lids do pop back when you press down, it’s ok! Just stick them in the fridge. There are many reasons a seal might not form, and none of them means the food is bad.

If you have jars that break during the water bath, that’s a bummer but it’s not the end of the world. It happens sometimes, usually due to a scratch or other imperfection in the glass. It’s only ever happened to me once. All the other jars of food are still perfectly good, so remove them, let the rest of it cool, and then deal with it like you would any broken glass.

This might seem like a lot, and at first it IS a lot. Think of it like playing Risk or Settlers of Cataan or some other complicated board game. The first time, it’s better to play with someone who’s done it before. But after a few times, you know exactly how to play and probably even feel comfortable teaching others. Also like a board game, canning is a lot better with friends.

I’m happy to answer any questions you might have, and if you live in Mendocino county, come over any time for a lesson. I’ll also be teaching a canning class in Ukiah in September.

You can contact Elizabeth at her blog, My Ukiah.

Tonight I did something that I’m a little afraid of: canning. I am a fermenter, I deal with “salt to taste” and adjust the temperature by finding the right location in the house at the right time of year. I correct errors by skimming off the top layer and weighing the whole concoction down with a wine bottle filled with water. Fermenting is a forgiving, and an inherently experimental process. The science and precision of canning intimidates me. I have never done it on my own, and last week I was so intimidated by the “canning set” in the grocery store that I just walked away, still empty handed when it comes to canning essentials.

I was initiated into the world of canning tonight by my friend Elizabeth. Her grandmother is the one who inspired the writing of these daily reports, and now she has helped me overcome my canning handicap, while also making me dinner. I don’t know how I will thank her… Well, I brought her some fresh-caught salmon backs and one of the best peaches I have ever tasted, because that’s how a locavore shows her love. Perhaps the joy of contributing to my survival will be enough, for there is nothing more sacred right now than the ability to prepare and store food.

Elizabeth welcomed me to Ukiah with a tour of her lovely sun-blessed garden, during which we picked thornless blackberries and harvested some fresh veggies. For an appetizer we had McFadden Brut with blackberries dancing in the glass, while we chopped things for the canning adventure. I wanted to do Mexican style pickles, savory and spicy. We also experimented with some pickled beet stems, which I’m really excited about – I love it when discarded, compost-bound components are reincarnated into unexpected eats. And, it really wasn’t that scary (though she did warn me that this is not to be done barefoot – while standing before the boiling pot with bare feet).

Once the jars were carefully placed in the boiling water bath, she dined me with a wonderfully garlic-y garden gazpacho, seared salmon backs, and cucumber/goat cheese niblets. It was a lovely evening of womantalk and food conspiring, and I left with a bunch of colorful jars of pickled goodness. I asked Elizabeth to share the dummy’s guide to canning with me so that I can remember all of her helpful tips, and of course share them with you. She promised she would, so stay tuned for that.

I confessed that one of the big challenges of this time of year is that survival is relatively easy, especially compared to the first few months of the project. Local abundance surrounds us now and indulgence has replaced compromise. However, it’s hard to shift into remembering that we must also be working triple time to put food away for the leaner times of year. It all seems so far away now, but the seasons’ ebb is real and winter was pretty barren. So, it is up to us to process enough food to keep our pantries vibrant and diverse throughout the year. It has been challenging to shift into this mindset when we just want to lay in the sun and gorge on stone fruit.

Elizabeth’s artful efficiency and infectious enthusiasm over the sound of every popping lid has inspired me to confront my canning block, and try to integrate this ritual into my daily life, before summer’s bounty disappears as quickly as it arrived. There really is no room for fear when it comes to this undertaking. If we had doubted that this was possible, for even a day, we wouldn’t have set out to do this in the middle of winter 7 months ago. Fear means hesitation, which means waste, and the opportunity cost is great. We have again and again had to circumvent fear or discomfort with resourcefulness, and ask questions when we need help. It is a humbling and rich process. So, canners, I’m curious – what’s your favorite thing to pickle/can? Share your recipe! Bizarre and unusual concoctions are especially welcome!