I’m sitting in my kitchen on Easter Sunday, watching steam uncurling from under the lid of a massive stock pot.

Tomorrow it’ll be lunch for the Americorps team that will be spending the next two months at the farm. I’m about to be swept into the whirlwind of Earth Day, endless planting, goat birth, milking, quail laying, chick nurturing, all the good stuff. The rain’s been coming down all day, the weeds are growing, the snails are rejoicing, spring is upon us. Everything is swelling with life.

This is usually kind of a tough week for me. My first love died on April 5th, 2006. Every day I let him go a little more, and every day the earth gives him back to me in some small way, by reminding me of his sense of symmetry, his grace, his frank practicality, his integrity and his sharp humor.

T.S. Eliot runs in a quiet loop in my head this time of year, the words re-combining themselves until they lose meaning, becoming a litany or a chant;

“April is the cruellest month, breeding

Lilacs out of the dead land, mixing

Its a tiny fragment of a huge, all encompassing poem, its opening stanzas, 1. The Burial of the Dead.

It might seem strange to begin with burial, unless you happen to be a farmer. When I plant my next crop of lettuce is when my previous crop is just coming into its own, the rosettes filling the curved beds with painterly swathes of color, seeming perfect and without end. We have to live in time; looking back to what we planted last year and the year before that, what went into the soil, and what worked and didn’t, we have to pay attention in the moment to the immediate needs of the farm, the way plants are reacting to the current weather conditions, and how the needs of the people we feed are being met, and we have to live in the future, seeing the seed and seeing the plant and seeing the compost the plant will become at the end of its life and the seed that will be nourished by it in turn.

Trillions of organisms living their lives create the foundation of our lives as a side effect.

In the midst of life, we are in death, and in death, we  nurture new life. Farmers have always known this, its been a mystery of life for as long as humans have been able to conceptualize these things. Easter Sunday is our modern re-telling of a very old pagan story; the god is born, the god is sacrificed, the god is born.

Those of us who are currently surrounded by baby piglets, or lambs, or goat kids, know this in our bones. We’re part of an interdependent ecosystem whose births and deaths wheel around us throughout the year, and depend on each other for the functioning of the whole. Last year has been put to bed. The composted manure, dead plants, and pruned limbs have been eaten by worms and bacteria and fungi, and laid themselves over the earth. Now, under a blanket of fog, new seeds pull nutrients from the remains of last years garden, new grass stands to be clipped by young animals fertilized by last year’s manure. 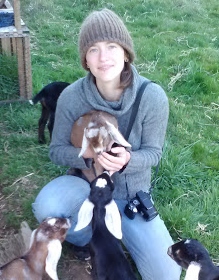 Maybe Eliot thought April was the cruelest month because its impossible to separate the spectacle of new life from the knowledge of death. Its impossible to see a new baby, a tiny seedling, or the first egg of the year and not be moved, in your core. Its also impossible to see it apart from the whole, and to not know its time on this planet is fragile and brief. There’s something so demanding about new life; it grabs everything you have and makes you pay attention. Often by butting you until you produce their bottle. It can make you forget that this baby isn’t the first baby ever on the earth. The immediacy can be overwhelming and the struggles difficult. The tiny seedlings demand water multiple times per day, the chicks are so vulnerable to drafts, bottle-feeding babies must be fed, no matter what. Knowing most of what surrounds us will turn over in a year can feel like a cruel joke and an insult to our effort.

Seen in another light, maybe that same thought can be comforting. We’re just here for a few turns of this planet, and we’ll see many cycles of death and renewal, and we’ll watch how it all builds on itself and how nothing can exist without the humus of the old to sustain it. In this way anything good leads to so much more good. And we can do our best to live our lives so that what we leave behind sustains exponential new life and growth. We can try to live like the fava bean, gathering our bacterial friends around our roots to nourish ourselves, opening our flowers for the bees, fanning leaves out to soak up the sun, and incubating the next generation, living richly and then gracefully sinking back into the earth, releasing pure nitrogen, creating clean, fertile soil wherever we happened to be planted. A fava bean can do this in one year. Luckily, we have more cycles to get it right.

Bucket loves this year’s chicks just like last year’s, and next year’s.

Its a huge responsibility and at times its a massive labor, but we’re nourished by those who have come before us, and we work for those who will come after us, so its our natural place in the cosmos to work in our Wellingtons in the wet, cold, intensely demanding spring. The fragile, heart breaking, ancient, fierce, vibrant life, carrying the memory of the past, but new every time. 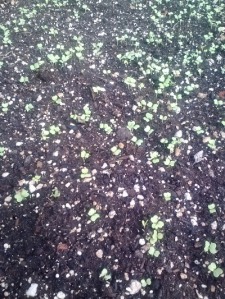 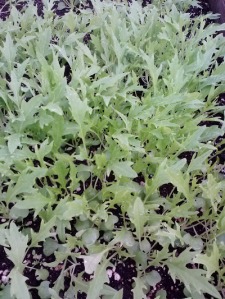 Did you catch our interview on Women’s Voices on KZYX? If you missed it, no worries, we have the link for you here:

Blake Moore was kind enough to talk to us about our locavore ways. We had a blast, her show is really fun and I hope everyone gives her a listen. We’ll be back on before this all is over for sure. 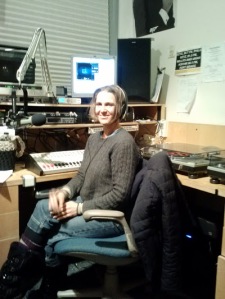 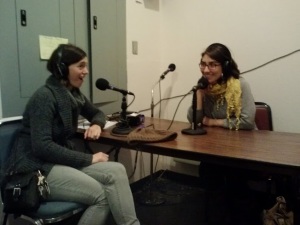 I know we’ve been a bit lax blogging lately- Spring has started and my life has been consumed by the greenhouse and by babies! Promise we’ll be back on the horse in no time. For better or worse, our Facebook page is where the action is! Check it out for gratuitous baby goat pics, mussel harvests, aioli making, and my big mastiff Bucket snuggling baby chicks. http://www.facebook.com/eatmendocino